Dragon Trail Interactive’s first quarterly report for international tourism brands on Sina Weibo tracks and analyzes Q4 2019 performance for national tourism organizations (NTOs), destination marketing organizations (DMOs), airlines, cruise lines, museums & attractions, and hotels. The data reveals that celebrity content is the most effective way to stimulate engagement on Sina Weibo, but that this engagement does not always indicate true interaction with the brand or its related content. KOL promotions, giveaways, asking questions, and other popular content can do more to get fans actually engaged with tourism brands online. As the first report of its kind, these Weibo Rankings set industry benchmarks for posting activity, engagement, and engagement rates, by which to evaluate future Weibo performance. In Q4 2019, we tracked 233 accounts across the six categories, 204 of which posted content during the quarter. On a weekly basis and for our quarterly report, we have chosen to rank accounts based on the total number of engagements their content received – this includes likes, comments, and reposts. We have also calculated average weekly engagement rate, by dividing total engagements by the number of followers each week. Included in our rankings tables for the quarter is the quarterly engagement rate – total engagements divided by the average number of followers for the quarter. This metric provides data with more statistical accuracy for long-term analysis as we continue to track Weibo performance throughout future quarters. 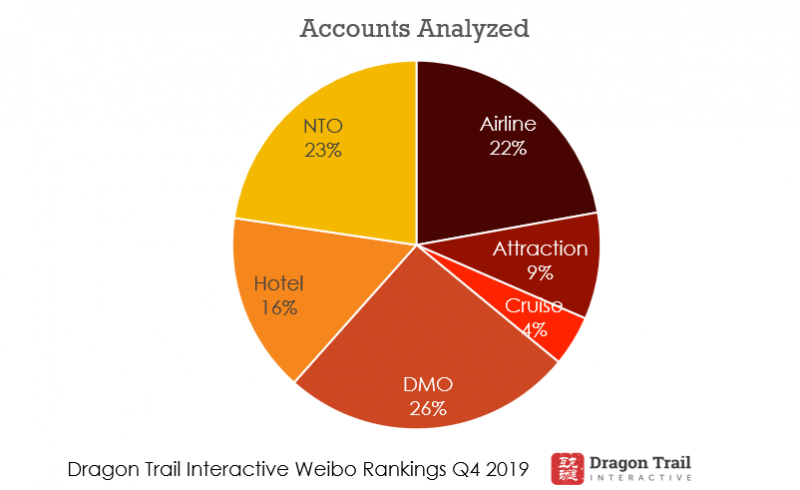 Looking at total engagement and average weekly follower numbers, we identified 17 accounts with above-average numbers for both metrics.

To try to understand what drives top performance on Weibo, we considered follower base, post frequency and content strategy as the main factors that drive high engagement levels.

We also looked at correlation between engagement and post frequency, and noticed even smaller correlation. This indicates that performance on Weibo is largely driven by content strategy.

Celebrity content is the number one way to drive up engagement on Weibo. That said, content that featured celebrities usually generated extremely high engagement, but this engagement was often only related to the celebrity, rather than to the travel content. To better understand the effect of celebrity content, we removed this content from each category to see how it affected engagement rate. This exercise did not include KOLs, who also boosted engagement rate, but in a way that engaged much more with the travel brand’s content than with the KOL only.

Nearly every single category had at least some celebrity content, with the most (by far) from destinations, then airlines.

In contrast to WeChat, Weibo is a stronger platform for sports-related content, as the platform offers more immediate news, shorter posts, and no limits on the number of posts from official accounts. We have also seen sports-related celebrity content, including figure skater Yuzuru Hanyu for All Nippon Airways, NBA star Kobe Bryant for Aeroflot, Wu Lei for the Catalan Tourist Board (he plays for a Barcelona football team and starred in the tourism board’s promotional video for the Chinese market), and a promotion on tickets to an FC Bayern Munich game from Marriott Bonvoy. 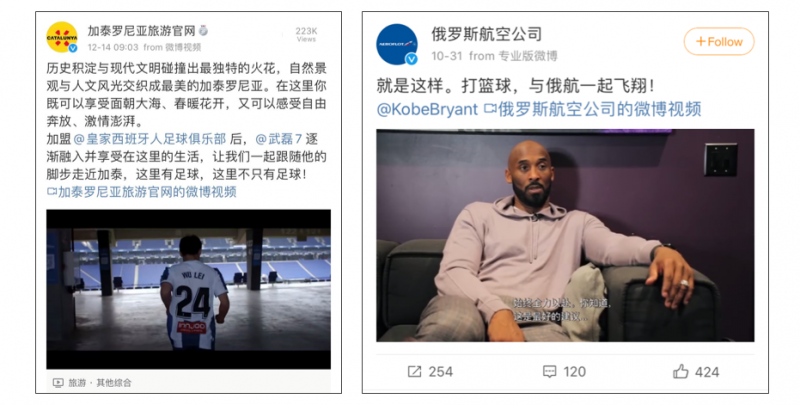 Sports-related content, like these short videos from the Catalan Tourist Board (left) and Aeroflot, is popular on Weibo

Weibo is a popular platform for short video content, and this medium was used for many celebrity posts, such as those by Aeroflot, Korean Airlines, Brand USA, NYC, Paris, the Catalan Tourist Board, Visit Copenhagen, and Visit Denmark. However, depending on the content, short videos can attract a lot of engagement without any celebrities. A stand out example of this is Hilton’s short video featuring an employee and his social outreach doing volunteer teaching in rural communities. This emotionally touching video generated even higher engagements than Hilton’s promotion featuring singer and actress Qi Wei, and made up 28% of all engagements for the entire hotel category in Q4. One caveat here is that the video on the employee was reposted by celebrity Qi Wei, and this did a lot to drive up the engagement.

Like celebrity content, giveaways are also a sure-fire way to drive up engagement, especially as these lucky draws generally have a ‘repost to win’ rule. But unlike with celebrity content, lucky draws get Weibo users to interact more with the actual brand. In Q4 2019, top airline content was almost exclusively lucky draws, in addition to some celebrity posts, content on 11/11 sales, and a few more interesting/unique articles from Aeroflot.

Without having to pay for a celebrity endorsement or give away free things, another strategy that can drive up engagement is simply asking questions, such as: What’s your new year’s resolution? How much did you spend on 11/11? Do you always bring your own shampoo when you travel? Which city is your favorite? Where would you like to visit? This can be a good way to get users to interact with brand-relevant content, and gain insights on your most-engaged followers. 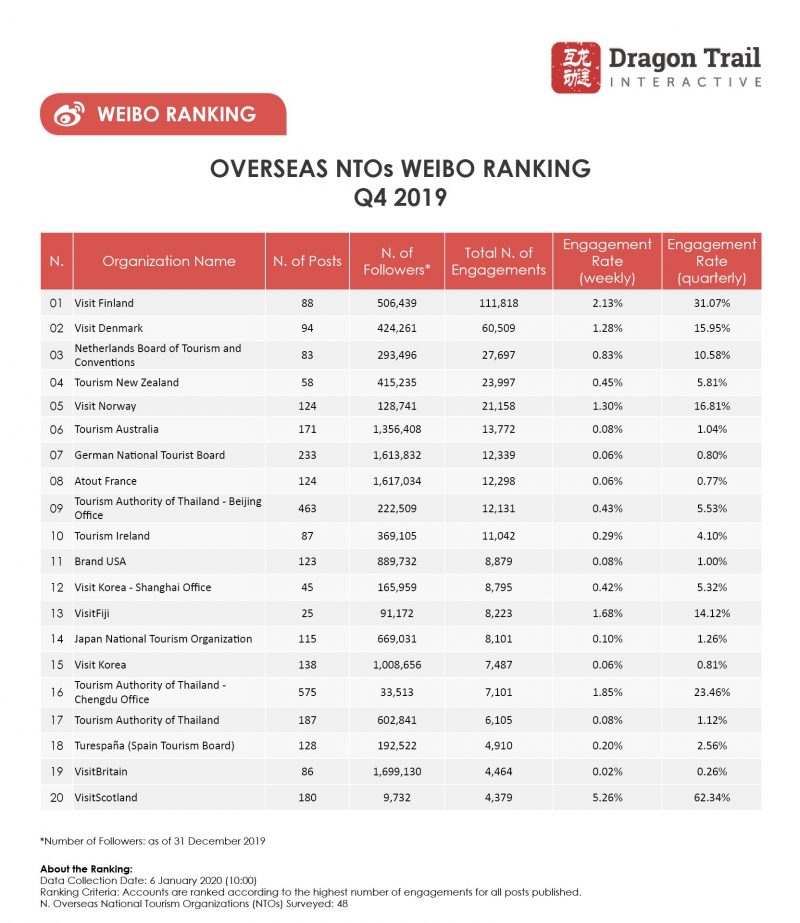 Scandinavian and Northern European national tourism board accounts are some of the strongest on Weibo, with higher engagement on this platform than article viewership in our WeChat Rankings. Many NTOs rely on celebrities to drive up engagements, including Jane Zhang for Brand USA; Korean pop stars EXO and Yoona for Visit Korea; TF Boys for Visit Norway and Visit Denmark; travel ambassador Leo Luo for Visit Fiji: TV series The Untamed stars Wang Yibo and Xiao Zhan for Visit Finland, and many others.

After adjusting engagement rates to remove celebrity content, the NTO accounts with the highest engagement are Visit Scotland (4.8%); Peru Travel (2.29%); the Tourism Authority of Thailand – Chengdu (1.33%); Visit Norway (0.70%); Visit Portugal (0.51%); Tourism Authority of Thailand – Beijing (0.43%); and Visit Finland (0.37%). Here we see that some Scandinavian accounts are still leading on Weibo even without factoring in the celebrity content, revealing real engagement and interest in these destinations and their social media content. 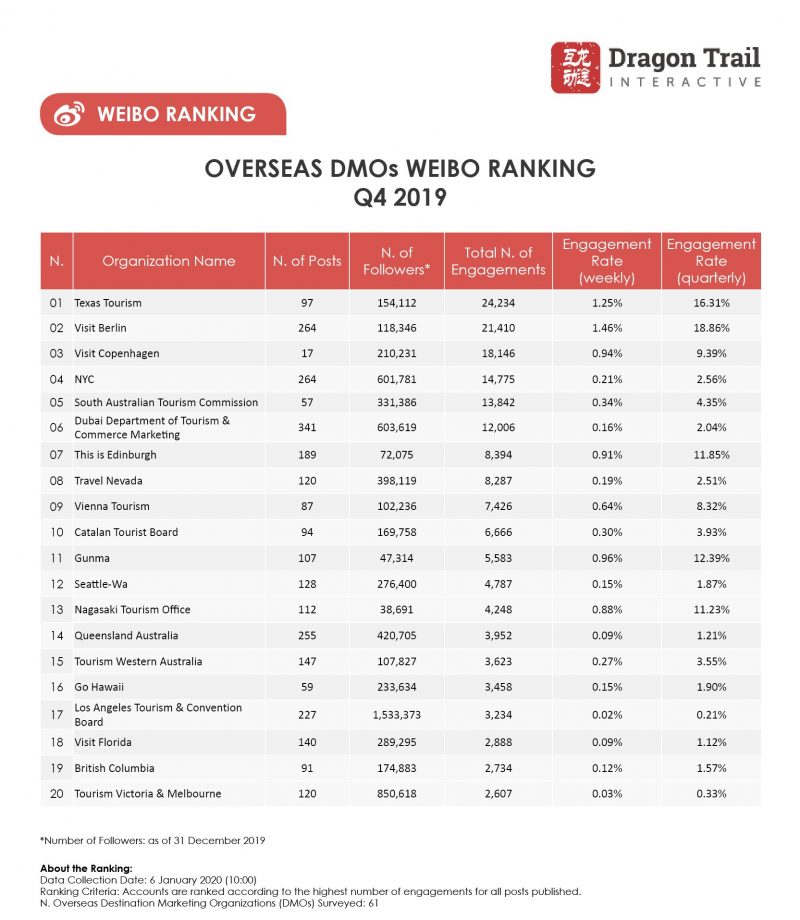 In the top 20 DMOs by engagements, there are five European accounts, seven US accounts, four Australian, one Canadian, one Middle Eastern, and two Japanese. This is fairly similar to the WeChat Rankings, except that we never see Japanese prefectures or cities in the WeChat Rankings.

After adjusting engagement rates to remove celebrity content, the DMO accounts with the highest engagement are Texas Tourism (1.25%), This is Edinburgh (0.91%), and Nagasaki Tourism (0.86%). 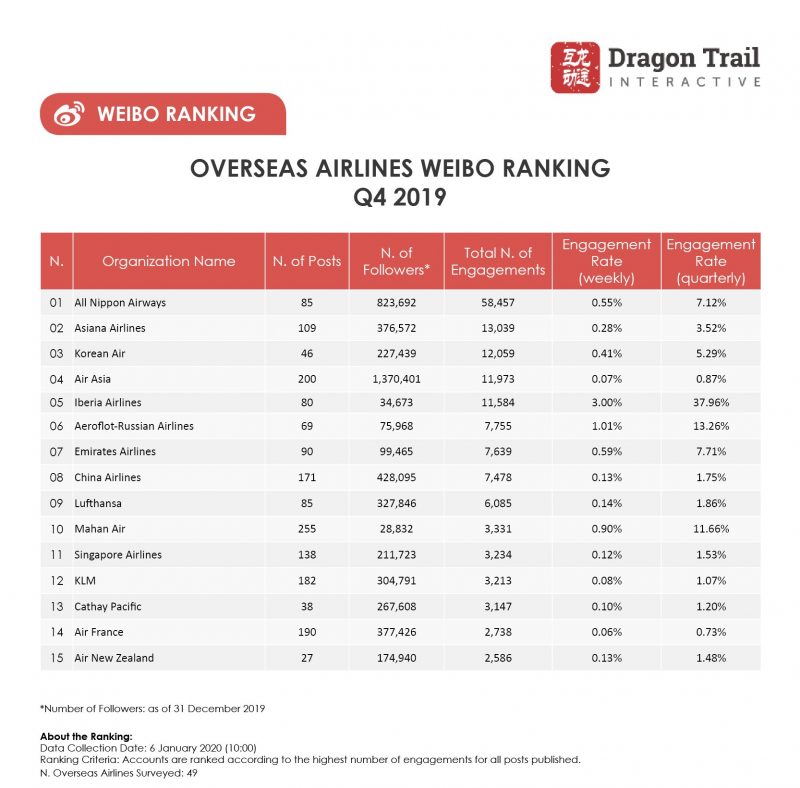 Compared to destination categories, airline accounts post less celebrity content. Content with higher engagement was mostly generated by discounts and giveaways. The few celebrity-related posts included Kobe Bryant for Aeroflot, K-pop groups for Asiana Airlines and Korea Airlines, and Yuzuru Hanyu for All Nippon Airways. Accounts including Finnair also worked with KOLs to raise engagements, but this is different from celebrities in that engagements generated are more relevant to the content topic.

Because airlines post less frequently, it can allow for wider diversity in who stands out from week to week, with Ethiopian Airlines in second place in the last week of December. Interesting from a content standpoint is Aeroflot in 6th place – this is an airline we never see in the WeChat Rankings, but they seem to have quite engaging and unique content on Weibo, including one article about a dog show, and another about health sanatoriums of the Caucasus. Iberia Airlines uses giveaways to achieve a high ranking and engagement rate. There are only nine cruise lines that posted at all in Q4 2019, and two of these only posted once each during the entire quarter. Engagement rates for this category are also very low. One reason could be content – cruise lines post a lot about their ships and the facilities on the ships, as well as some promotions, but not so many lucky draws as airlines, and no celebrity content. However, Viking Cruises did benefit from their short video promotion featuring economist Xue Zhaofeng, who can be understood better as a KOL than a “celebrity”. The only other post from the quarter than stood out for driving up category engagement was Dream Cruises’ sweepstakes with the promotional hashtag “It’s so hard to travel with the whole family” (#全家旅行的我太难了#). The museums and attractions category has a much higher average engagement rate than any other category tracked on Weibo, but this is affected to a large extent by a single post by the Empire State Building, featuring a celebrity (Roy Wang) who turned on the lights at the Empire State Building for World Children’s Day, as part of his work with UNICEF. This one post got more than 25,000 engagements, and a 182% engagement rate. If we remove this outlier, then the category’s engagement rate is 0.51%, which is still the highest out of any of the six categories tracked.

Museums on Weibo mostly posted about artwork, rather than relying on celebrities, giveaways, or KOLs to boost engagement. Most of the top articles posted in this category were about exhibitions, artists, and artworks, and the Art Institute of Chicago has monthly downloadable phone wallpapers that are popular. Hotels posted a variety of content, including celebrity and KOL promotions, information about loyalty clubs and properties, and seasonal sales. A single hotel property rather than a hotel group, Marina Bay Sands often ranks high for hotel accounts on Weibo, which it is less likely to do on WeChat. Radisson is a hotel group without a strong international presence on WeChat (where its official accounts are for single, Chinese properties), but on Weibo, it has one of the highest engagement rates, and posts often about international properties, including those in Cape Town, Thailand, and Sydney.

Objectively assessing performance on Weibo is challenging for a number of reasons – one is the ease of purchasing engagement, which can lead to questionably high engagements. There is also the well known phenomenon of “zombie fans” or “water armies”, which are said to make up 40% of active users on Weibo – much higher than the estimated 15% on Twitter.

Fake followers and fake engagements are rather common and cheap to obtain on Weibo. In recent years, the Chinese government has launched investigations into the situation, leading to responses from Weibo to change algorithms to weed out the fakes and to limit the number of engagements shown on posts to 1 million. However, without clear limitations or restrictions from the government, the situation persists. The reasons for it depends on each stakeholder. Celebrities and KOLs need the high follower and engagement numbers to attract brand sponsorships. Brands let it pass in order to meet KPIs, despite the watered-down results. Weibo uses the high numbers to maintain its business value. Because of all of these factors, and the fact that the fake followers are such a well known phenomenon on the platform, this is unlikely to change dramatically in the near future. Instead, it’s just important to know that it is common on Weibo, and can especially have an effect on content featuring celebrities. (For some practical tips on how to find celebrities with more legitimate fan bases, read Jing Daily’s August 2019 article, “Fake Fans Continue to Plague Celebrity, Influencer Endorsements in China”).

Our calculation of engagement rate also identifies large accounts with low total engagements. These large accounts, which have existed on Weibo for a long time, are more likely to contain zombie fans, or former followers who have long since abandoned their accounts.

Engagement:
– Zero comments on a post, accompanied by hundreds of likes or retweets

Followers’ profiles:
– Those with only a few posts but thousands of followers
– Those following hundreds but who don’t have many followers