Dragon Trail's first quarterly report on overseas universities' WeChat and Weibo marketing offers a unique snapshot and analysis of the content trends and strategies used to communicate with Chinese students and alumni. Since June 2022, Dragon Trail International has been tracking overseas universities’ social media marketing for China on WeChat and Weibo. Our first quarterly report offers a snapshot of the content trends and strategies used to communicate with prospective and current Chinese students and alumni. Based on data compiled from 38 active Weibo accounts and 33 active WeChat accounts of universities across 13 countries and territories in Asia, Europe, Oceania, and North America, the rankings also set the first objective industry benchmark for measuring the performance of higher education marketing for China.

Our initial list of universities was based on the QS World University Rankings 2022, with several accounts since added by request. Universities who would like to be added to the list should contact Dragon Trail directly at communications@dragontrail.com.

– More than half of the top 20 accounts on both Weibo and WeChat are UK universities. This is certainly the most active country for Chinese social media marketing. Hong Kong is extremely strong, and Singapore stands out on WeChat. In Australia, Monash and Queensland Universities are the strongest on Chinese social media. Meanwhile, the US – the country that receives the most Chinese students – and Canada are underrepresented.

– The University of Glasgow is strong on both Weibo and WeChat. The account offers not just practical information for Chinese students, but many photos and more inspirational posts about campus life.

– The Hong Kong Polytechnic University also stands out on both social media platforms. Its popular content includes giveaways, posts about the school’s contributions to scientific achievements, and ceremonies for graduation and commencement.

– Online informational sessions receive lots of attention – some of the most popular include Nanyang Technological University in Singapore, the University of Hong Kong, and Monash University.

– Earlier in the year – when some of the big international university rankings were being released – these drove the most readership and engagement. Q3 didn’t see as many rankings releases, but the Academic Ranking of World Universities (aka Shanghai Ranking) did attract attention for Hong Kong universities.

– WeChat and Weibo are good ways for universities to communicate practical information to current and prospective students, such as application deadlines, the resumption of in-person attendance for all in Australia, or information on registering visas and getting signed up for healthcare in the UK. Moreover, British universities shared information about charter flights to the UK, organized to help students during this period of extremely limited commercial flights.

– However, it was an article about the death of Queen Elizabeth II that got the most views of any content posted by an overseas university on WeChat in Q3 2022, posted by the University of Glasgow. Southampton University’s post about the Queen was the third most-liked Weibo post by a university. Other universities throughout the UK also commemorated the monarch’s life. The top 20 WeChat accounts of overseas universities in Q3 2022 included 11 in the UK, four in Hong Kong, two in Singapore, two in Australia, and one in Canada.

Looking at the top of the rankings table, the Hong Kong Polytechnic University, Nanyang Technological University, and the University of Manchester all posted significantly more than the average of 26 posts for the quarter, which helped their overall viewership numbers as well. But ranked third, the University of Glasgow only posted nine times and received the highest average views per post. This is especially because of the 40,935 views they got for their post commemorating the death of Queen Elizabeth II. Other popular posts by the University of Glasgow included information on the latest date to return to campus, and practical things international students need to do during their first week – including signing up for healthcare and registering visas. 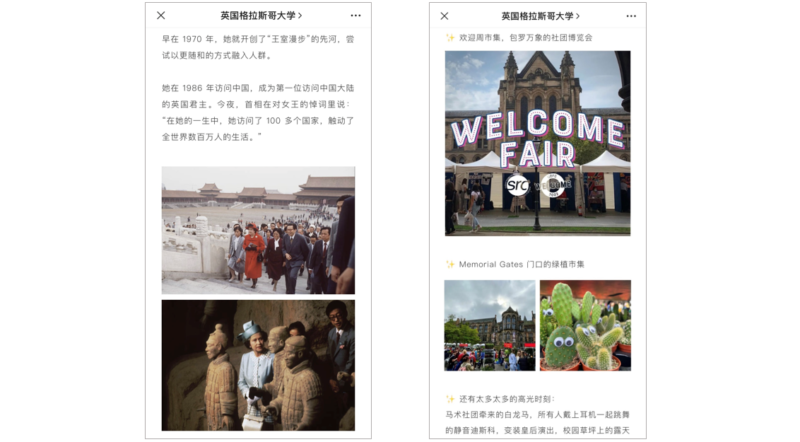 Other top posts included announcements about the Academic Ranking of World Universities (aka Shanghai Ranking) from the Hong Kong Polytechnic University and the City University of Hong Kong; information about a University of Hong Kong + Berkeley joint degree and related online informational event; the opening of the new gates at Hong Kong Polytechnic University; and UCL’s post commemorating the death of Queen Elizabeth II. Articles about the Queen were the top content of the quarter of the Universities of Sheffield, Southampton, and Leeds. WeChat serves as a good way of communicating useful information for Chinese students enrolled at overseas universities. The most-read articles from the University of Manchester and Imperial College London were about chartered flights to bring Chinese students to the UK. In Australia, the University of Queensland shared information about changing international travel rules and the school’s plans to transition to a fully offline model in 2023. Meanwhile, appealing to prospective students, Nanyang Technological University in Singapore used WeChat to advertise several online informational sessions. 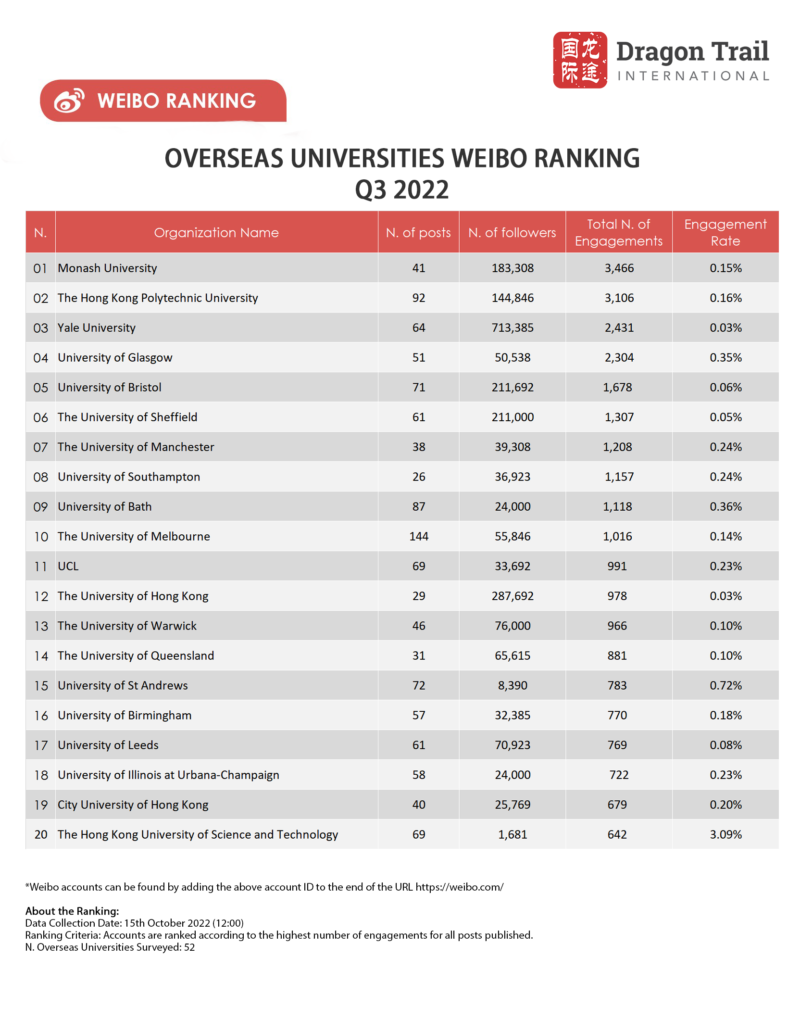 The top 20 Weibo accounts of overseas universities in Q3 2022 included 11 in the UK, four in Hong Kong, three in Australia, and two in the US.

At the top of the rankings table, Monash University’s most engaging content included a live streamed open day, information about applications for November entry, a short video made by a student showing a day at Brighton Beach, and a video promoting pharmacy degrees. The form of these posts (live streaming vs. link to written information vs. video) is mixed, but overall it is useful information that was most engaging.

The Hong Kong Polytechnic University attracted many comments and likes for a blind box giveaway of university-branded prizes. The university also shared events like the live opening ceremony of a new main entrance, and a video of the commencement ceremony for new students. Finally, one of the most-liked university posts was about Poly U’s contribution to the Chang’e 5 lunar probe and China’s lunar exploration.

Another popular moon-related post was by the University of Glasgow, which shared photos of the full moon around campus for Mid-Autumn Festival. Weibo users also gave more than 100 likes to a video of a sunset at the Scottish university.

Southampton University accrued some of the most likes for university Weibo content with posts about the death of Queen Elizabeth II, and photos of graduation. The University of Sheffield’s post of a food van on campus, asking if viewers had frequented it, resonated with past and current students.