This analysis looks at how international tourism brands responded to the coronavirus crisis on WeChat in the last two weeks of January 2020, and how WeChat users in China responded. It reveals increased attention and engagement for brands that addressed the crisis. The tourism industry was one of the first to see a major impact from the novel coronavirus outbreak. Following the ban on domestic group tours from 24 January, and outbound group tours and package travel from 27 January, the industry has been overwhelmed with cancellations and inquiries. During the outbreak, many tourism organizations with WeChat accounts have used the Chinese social media platform to publish content regarding the crisis. This analysis looks at how international tourism brands responded to the crisis on WeChat during the last two weeks of January, as well as how WeChat users in China responded.

Accounts in all categories decreased the amount of content they posted on WeChat in the last week of January – this is affected by the limited number of posts that service accounts can make each month, as well as by the uncertainty of the situation. We can also see a corresponding drop in total views for nearly all account categories, except for airlines. But generally speaking, content from all categories that related to the coronavirus crisis – including cancellation policies, local emergency contact information, situation updates, and words of encouragement – got increased views, and positive comments from readers. The analysis reveals a strong interest in useful information in the crisis, and the rewards in attention and image that tourism brands received for addressing the coronavirus crisis as it unfolded during the last two weeks of January.

Compared with 2019, international tourism brands published more content on WeChat in the fourth week of January (20-26 January), but significantly reduced activity in week 5 (27 January-2 February). In 2020, the number of WeChat articles published during the last week of January dropped by 54% compared to 2019.

The number of articles dropped significantly in week 5 across all six categories. Cruises saw the biggest drop in activity, publishing 90% fewer articles. This is followed by hotels at 78% and NTOs at 70%. A reduction in content generally leads to fewer total views by WeChat users, but airlines were an exception, generating 50% more views in week 5 despite a 36% drop in the number of articles published. It is reasonable to assume that travel brands were uncertain about the severity of the coronavirus outbreak, and responded at first by pausing their marketing.

1.1 Findings from the WeChat Rankings

During the last week of January, the number of articles published on WeChat by NTOs decreased by 70% compared to the week before. Of the 52 NTO accounts tracked, only 35% published articles in week 5, compared to 69% in week 4.

63% of accounts reduced their WeChat activity, while 33% of accounts published the same amount of content as the previous week. Only two accounts increased the number of articles published, and both of these published content related to the crisis. The first, the Austrian National Tourist Office, saw a 1.7k increase in total views for the week. The second, Visit Korea – Beijing Office, increased total views by 1.3k.

Subscription accounts had a 56% decrease in articles in week 5, accompanied by a 52% decrease in total views. This is primarily due to the high number of views in week 4, which also drove up total views. Particularly notable was Visit Finland’s 26 January article about local medical resources, which received more than 100,000 views – the highest number counted by WeChat. Visit Finland didn’t publish any content the following week. In week 5, Visit Norway published an article with local contact information and news about visa extensions, and saw a 7.7k increase in total views. Tourism Australia also published preventative measures on 2/1 that generated over 19.9k total views.

Among the accounts with the highest increase in total views, the topics that stand out include local contact information, donation information, and preventative measures. In contrast, accounts that saw a drop in total views tended to publish more regular updates unrelated to the crisis.

NTOs received more comments on their WeChat articles than other account categories, particularly for content that included words of encouragement and information about preventative measures at airports. 2.1 Findings from the WeChat Rankings

Of the 81 DMO accounts analyzed, 52% decreased their WeChat activity in week 5, while 41% accounts maintained the same number of posts as the previous week. Six accounts increased the number of articles published, and each saw an increase in total views, though some were much larger than others.

The biggest decreases in total views can be attributed to several accounts publishing very popular posts in week 4 – for example, YesMilano (a service account) published a Chinese New Year post that received more than 13.6k views in week 4, and Visit York (a subscription account) received more than 22.6k views for an article about coronavirus in week 4.

Throughout the crisis, DMO accounts continued to publish regular content, which possibly reduced the decrease in total views for DMOs compared to other categories. Most accounts started publishing crisis-related content in week 5. DMO content did not receive many comments. Looking at the top accounts for the two weeks, only the Hawaii Tourism Authority attracted comments for its 29 January article, “Aloha! Here are some safety tips for travelers.” 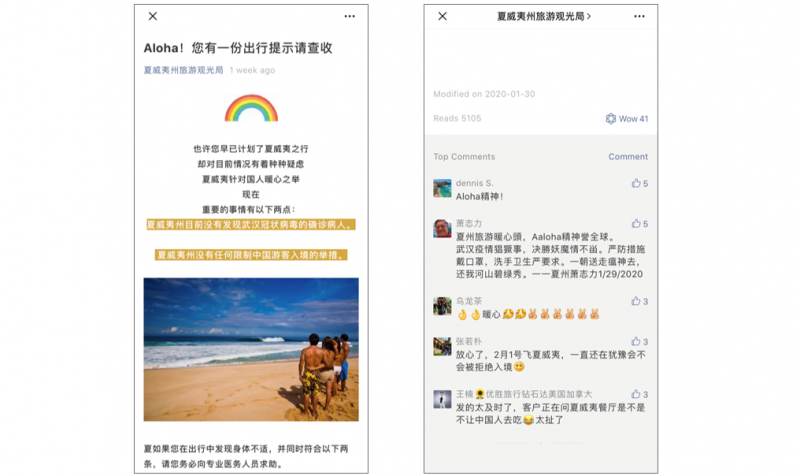 3.1 Findings from the WeChat Rankings

During the last week of January, the number of articles published by airlines decreased by 36%, the smallest drop among all categories. Total views for airlines during this week increased by 50%, showing an immediate interest in airline news at this stage of the crisis.

54% accounts published articles in week 5, compared to 78% in week 4. Of the 46 airline accounts analyzed, 48% decreased activity on WeChat in week 5, while 35% of accounts maintained the same number of posts as the previous week. Eight accounts increased activity in week 5, and all received a significant increase in total views.

In the beginning of the crisis in week 4, most airline articles were regular updates. Later, many accounts started to release cancellation policies towards end of week 4, and updates on canceled flights in week 5. Since 76% airline accounts are service accounts and had to wait for a new month to start to post again, there is a significant increase of posts on 1 February, particularly related to canceled flights.

Common topics were trip cancellations and cancellation policies. However, the top accounts also published more about preventative measures and donations. 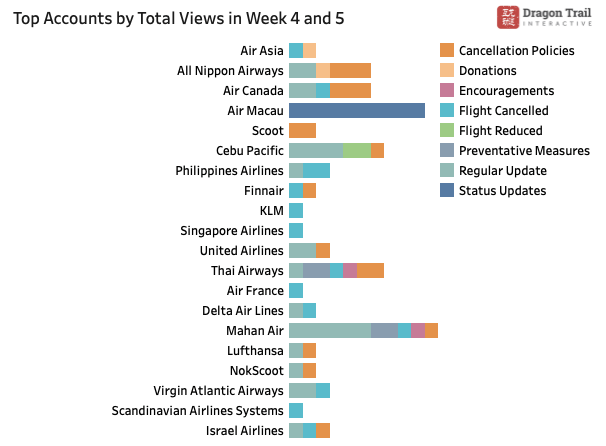 Similar to other categories, airline accounts received a lot of support from followers about the decision to cancel trips, as well as support for Wuhan. Additionally, many accounts are actively responding to questions in the comments sections of their WeChat posts, by providing cancellation website links and phone numbers.

4.1 Findings from the WeChat Rankings

During the last week of January, only two (13%) cruise line accounts published articles, compared to 10 (67%) in week 4.

Out of 15 cruise accounts analyzed, 10 (67%) accounts decreased their activity in week 5, while four (40%) maintained the same number of posts as the previous week. Royal Caribbean International is the only account with an increased number of articles in week 5, generating 58.9k total views for content related to cancellation policies.

Viking Cruises and Dream Cruises had the largest decreases in total views during week 5, since they did not post at all, sustaining 69.7k and 53.5k decreases, respectively. In week 4, both accounts published about cancellation policies and generated significant views. On the other hand, PCLGlobal and Star Cruises both published regular content in week 4 and saw a decrease in total views.

At the beginning of the crisis, many cruises were publishing regular content. As the crisis went on, cruise accounts paused all WeChat posts between 25-28 January, resuming on 29 January with a post from Royal Caribbean about cancellation policies and preventative measures. The top-ranking accounts for both week 4 and week 5 all published crisis-related content, such as cancellation policies, preventative measures, and donations.

For cruises that published crisis-related content, responses were very positive, surrounding topics like corporate social responsibility (CSR) and support for Wuhan. Many comments were from followers who canceled trips but plan to reschedule; some were also from repeat customers loyal to the brand.

5.1 Findings from the WeChat Rankings

During the last week of January, the number of articles published by museums and attractions decreased by 52% compared to the previous week. Out of 28 attraction accounts, 36% published articles in week 5, compared to 64% in week 4. 46% of accounts decreased their activity in week 5, and another 43% maintained the same number of posts as the previous week. The only accounts that increased the number of articles they published in week 5 were The British Museum, Skyrail Australia and Cairns Drive. These accounts all published regular updates, unrelated to coronavirus.

Among the 28 attractions accounts analyzed, 18 (64%) are service accounts and 10 (36%) are subscription accounts. Service accounts saw the biggest drop in total views, with a 48% decrease in articles and 89% decrease in total views. This is primarily due to Hong Kong Disneyland, which received 58.9k views in week 4 with content about temporary closure but did not publish in week 5. Subscription accounts published 70% fewer articles, but generated 9% more total views. This increase was primarily driven by Banff National Park, which received more than 4k views in week 5 for an article with local contact information and medical advice. Banff received the most views of any attraction on WeChat in week 5.

During the last two weeks of January, 71% of attractions published regular content, unrelated to the crisis. The only accounts that did address the crisis on WeChat were Banff National Park, Hong Kong Disneyland, and Ocean Park. With only three attraction accounts posting about the crisis, only Banff National Park received many comments from followers, all of which were very positive. Accounts that continued to publish regular content received very few comments. 6.1 Findings from the WeChat Rankings

Dorchester Collection is the only subscription account that published content in week 5, and this was a regular update, unrelated to the coronavirus crisis. Total views barely increased in week 5. Service accounts decreased the number of articles published by 75%, with an 84% decrease in total views. This is primarily because of Hilton and Marriott Bonvoy, as both brands generated high total views in week 4 and did not publish articles in week 5.

The fact that the large majority of hotels are service accounts meant that they were limited in how often they could post on WeChat. As shown in the timeline, many accounts had to wait until 1 February to publish content, having used up their four monthly posts earlier. The majority of early February posts were about cancellation policies. A significant number of content related to cancellation policies was published on 1 February. 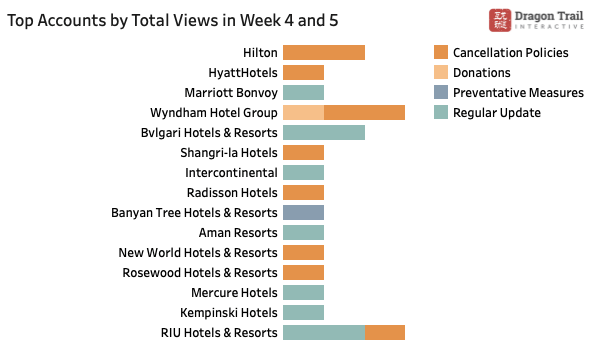 Hotel accounts that published crisis-related content tended to generate significantly higher engagement from followers. Comments on these posts were generally positive, relating to brand CSR, response speed, customer service during cancellation, support for Wuhan, and plans to stay in the future.